I can’t wait to read this book!

Here’s the overwhelming difficulty one faces when talking about Christian Reconstructionism (CR):

Most people have never heard of it.

Those who have are usually divided between worried liberals and ignorant conservatives who think it means theocracy. And when they envision theocracy, they’re thinking about Margaret Atwood’s The Handmaid’s Tale brought to life.

Thanks for passing it on!

I have always enjoyed Jane Austen’s books and more recently the spin-offs too. I look forward to reading this one! 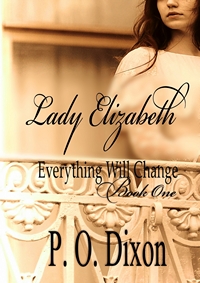 From the desk of Kimberly Denny-Ryder:

What would you do if you realized your entire childhood was a farce? Of course we occasionally hear of stories of children who are mistakenly switched at birth, or whose families raise them in oppressive cults or religions that distort their very realities. It would be quite a lot to take in once the truth was uncovered, and that is precisely the focal point of P.O. Dixon’s latest offering, Lady Elizabeth: Everything Will Change, the first of two works.

Over a decade ago, the Duke of Dunsmore experienced a great tragedy in his life: his only son and granddaughter died in a horrific carriage accident, with only his daughter-in-law and his grandson surviving. Wrecked with guilt, he is desperate to bring happiness back into his family’s life. While visiting Lambton he notices a young and pretty girl, kidnaps her and raises her as…

Thanks for passing it on!

Here’s my past writings:

A blog full of humorous and poignant observations.

How I Lost My Chains

I've Learned The Most Unlearning Everything I've Ever Known

Tales from the mouth of a wolf

writes a short story every week

Bringing you love through spirit!

I am Moved by Faith
unbolt me

finding my roar, one day at a time

Rebelling against a culture that values assimilation over individuality.